‘The Big F Awards 2017’
~Gurgaon’s Biggest Food Awards successfully concludes with a lot of fanfare ~
September 20th 2017, The Hyatt:Gurgaon’s biggest and most popular food awards – “The Big F Awards” concluded its fourth season with flourish and fanfare. The night was packed with action, great entertainment and many luminaries from across the industry. It was the most spectacular evening, as the popular The Big F Awards 2017, announced the winners for this year. The glittering evening witnessed many well known names not just from the F&B industry, but from the entertainment industry as well. The panel of judges, gracing the occasion consisted of acclaimed chefs Manjit Gill, Kunal Kapoor, and Saby Gorai, while the critics included food historian, Osama Jalali, author and columnist – Anoothi Vishal, well-known critic Rinku Madan and the food writer and founder of The Big F Awards, Indian Food Freak and Gurgaon Food Freak, Pawan Soni.

The top chefs of India, Padma Shri awardee SanjeevKapoor was the guest of honour and other special Chefs included Amrita Raichand, Manish Mehrotra, Manisha Bhasin, Rakesh Sethi, and Saransh Goila at the award function where over 95000 votes were casted by public through the web poll system. Other renowned people from the culinary industry who graced the event were Zorawar Kalra, Rocky Singh, Ashish Singh, and Siddharth Talwar amongst others. 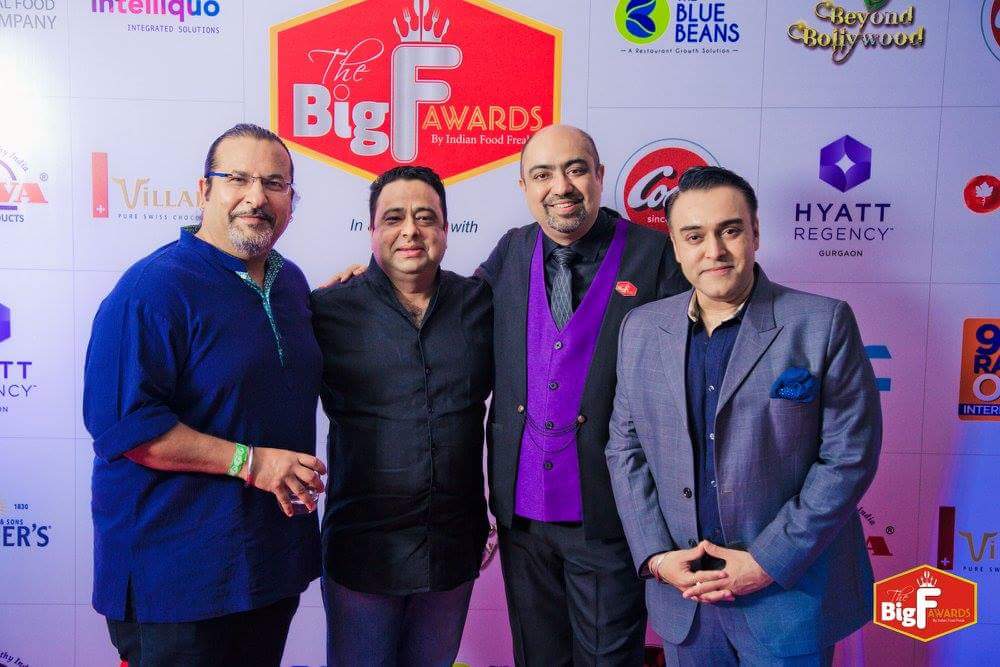 The evening started off with a bang with live performance of Bollywood’s famous playback singer Neha Bhasin(Jag Ghoomya Fame). She glorified the evening with her melodious voice and sang some of her famous songs. This was not all, RG Studio’s BEYOND Bollywood team (Kingdom Of Dreams fame) performed with live drums and made the evening more memorable with a heart thumping performance. There was also The Big F Awards special which honoured the people who have put in hours of hard work to make spaces succeed, from the best-in-house PR professionals, to the Talented Young Bartender, to the Debutant of the Year, as well as the Restaurant of the Year 2017 and the Restaurateur of the Year 2017. The jury specially facilitated Chef Sanjeev Kapoor for his recently being awarded Padma Shree.

Pawan Soni, Founder Indian Food Freak and The Big F awards commented on the event, “Over the years, The Big F Awards has become the benchmark in quality when it comes to the food and beverage industry in Gurgaon. From home chefs, to stand alone units to five star hotels, everyone gets a chance to shine. The awards themselves are reflective of the spirit of Gurgaon, buzzing, alive and full of excitement and innovation. They are a night when the industry comes to celebrate it’s finest and also to let their hair down and enjoy a great evening as well.”
The Big F Awards were graciously hosted by venue partner, The Hyatt Regency Gurgaon on 20th September, 2017. The event sponsors on board were Cocio, Nova dairy Product, Beam Suntory, Long Horn, POSIST, Lake Forest, TRC Consulting, Good To Go, Monin, SpeedX, Himalyan, Radio One, Blue Beans, and Intelliquo Communications.
The Methodology :
The Big F Awards followed a stringent short listing process that went through various stages. Winners were declared across five contenders in each category.
(i) The Jury’s Choice awards where the jury selected their own winners in each category with each jury member having one vote.
(ii) The Popular Choice awards where the nominated contenders were awarded through a public voting system.
Winners:
Categories People’s Choice Jury
Indian Cuisines
North Indian Dhaba, est 1986 Delhi Tappa by Punjab Grill
Indian Regional Cuisine SodaBottleOpenerWala Matamaal, and Coastal Reef

The hard working jury had some of the most stellar names n the culinary world come together to cast their votes and make the choice.

Chef Manjit Gill, quite frankly, needs no introduction. Surely everyone knows that he is the Corporate Chef of ITC Hotels overseeing more than 100 restaurants of this hotel group ?That apart, he is also the President of the Indian Federation of Culinary Associations (IFCA). However the greatest quality of Chef Manjit Gill lies in the fact that, in spite of his iconic status, he remains down to earth as is evident from these words of his: “Though I am learning still, I would love to see myself as a teacher someday. I cannot think of becoming an entrepreneur as I cannot be anything apart from a chef even in the future.”

Need we say more about this food titan?

Chef Saby Gorai can display almost as many awards on his lapels as generals – best Chef of India as awarded by the President of India (youngest chef in India to receive this award), Silver Hat presented by the Indian Culinary Forum, marked as “5 people to watch out for” in Fortune India 2013, etc. Having been instrumental in building up numerous success stories in the restaurant line such as Kitchens for Ai – The Japanese Restaurant, The Love Hotel, Lap – The Club, Olive Beach, Olive Qutuband the Moving Kitchen by Olive and Lavaash, he also runs a boutique consultancy company called “Fabrica by Chef Saby”.

Osama Jalali is a seasoned food critic and consultant who contributes mainly for The Hindu apart from other publications. Osama is a rare species amongst food critics/journalists in as much as he has not just restricted himself to writing about food but has also wielded his hands in the kitchen whether by way of cooking or curating community/khandaan (Awadhi, Rampuri, Shahjahani, Nizami) based menus with his mother NazishJalali for hotels and private dawats. Born and brought up in the by lanes of Old Delhi, his parental roots are drawn from the erstwhile princely state of Rampur in Uttar Pradesh.
Pawan Soni is the founder – member and CEO of Indian Food Freak, a blog that he started to appreciate the art of cooking and connect with like-minded foodies. That apart, he also does restaurant reviews for various publications and food blogs and administers various food and wine related groups on Facebook which have a huge fan following.
Rinku Madan is an acclaimed Gourmand, ex Editor of ‘Times Nightlife Guide’, writer with The Economic Times. The Sunday Times and The BBC Food Guide. She recently completed her studies in Global Journalism at the Harvard University studied apart from studying ‘Sparkling wine making’ with one of India’s leading Winery. She had earlier studied at the French Culinary Institute in New York to certify in the arena of Food Writing.
Anoothi Vishal is well known for her intensive writing covering all aspects of the restaurant business in India as well as for delving into food history and culinary cultures. She is India’s most credible food writer and critic and writes for top publications including The Economic Times, The Times of India, The Hindu and NDTV.com. She is also the founder of The Great Delhi Pop-Up, curating exclusive and sought after events offering unique wining, dining and cultural experiences”
About Indian Food Freak

Indian Food Freak is known for its credibility in the food blogosphere. Founded by PawanSoni as a platform to appreciate the art of cooking and connecting with likeminded foodies, the website http://www.indianfoodfreak.com is currently one of the biggest food blogs in India with a monthly readership of almost a 100,000 pages every month and an Alexa ranking of nearly 25000. Offshoots of this website are Facebook groups related to food and wine namely, Indian Food Freak with a followership of 33,000 plus dedicated foodie members (a forum where amateur chefs and food lovers share their experiences and post their recipes as a result of which, it has turned into a veritable F&B Encyclopedia), Gurgaon Food Freak with 25,000+ members (a platform for debates and discussions on the food scene in Gurgaon coupled with monthly not-for-profit events in hand-picked restaurants which have become the talk of the town and are booked within hours of uploading the event invitations in the group) and Indian Food Bloggers Network (with 30,000+ members) apart from the Gurgaon Wine Club, Noida Food Freak, Mumbai Food Freak, Ranchi Food Freak, Middle East Food Freak, Bangalore Food Freak, Kolkata Food Freak and Gurgaon Helpline.